For the longest time, I thought I was living in a distributing permutation of the story of the hare and the tortoise. Except in this version, the hare had a headstart. The hare was obviously faster. And the hare never rested. I, a humble tortoise, had no hopes of catching up.

This was what I felt like when I first got to Berkeley. The purpose of these “races” wasn’t even to win. I wasn’t trying to beat anyone. I just wanted to be an equal — to be just as good as the next person. In everything, howvever— learning, internships, classes, teaching, fitness, health, socializing — I felt like I was so behind.

Yes, I know this is Impostor Syndrome. Yes, I know that my image of my own skill-level is often inaccurate. Yes, I know that I shouldn’t be comparing my journey with other people’s. Knowing all of these did not help me. I still spent so much of my time at this university with the sinking feeling that I wasn’t cut out for this.

There was an increasingly small number of things I believed I excelled at. No matter what else I was doubtful about, I was confident in two of my skills:

These became my accelerators.

Let’s go back to our corrupt hare and tortoise story, but add one exception — the tortoise can accelerate faster than the hare. Give the hare a headstart by $20 m$. Say the hare’s present velocity is $30 m/day$, compared to the tortoise’s velocity of $3 m/day$. Now, say that the hare’s acceleration is $2 m^2/day$, while the tortoise’s is $4 m^2/day$. How long before they’re at equal footing?

$28$ days. It takes less than a month for the tortoise to catch up, despite every disadvantage. Go ahead and make it as bad as you want for the tortoise. Give him zero initial velocity. Give the hare a massive headstart, make the acceleration differential tiny. As long as the race is infinitely long, the tortoise will catch up. 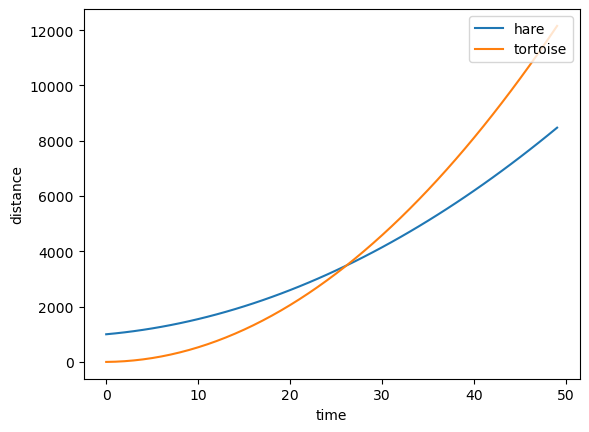 I think of myself as this tortoise. I have a couple of accelerators, that help me pick up pace as I keep going at buliding a skill. Every day I wake up, I try to push myself a little bit harder than the previous day, feel the acceleration a little bit more. It just takes time, but it does take time. There is no miracle cure to being amazing. There is only ways to get better and better.

You don’t need to be the best. You don’t even need to be good. All you need to be is accelerating, and you’ll find yourself matching anyone’s skill level in due time.